Create a perfect mindset for success with De Novo Performance 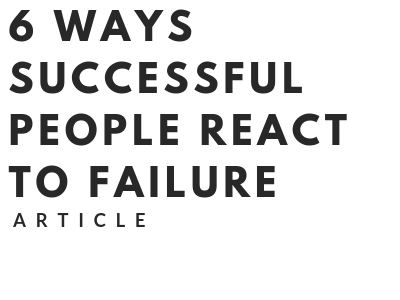 Failing is a “buzz word” in entrepreneurial and solopreneurial worlds. Imprinting Gen-Y’s with the mindset that you must fail to be successful. So how do successful people react to failure?

Before you go running down the street looking for failure, know that it never looks the same for any two people. What may derail you isn’t even a bleep on someone else’s radar.

Just for the record, I totally agree with failing forward but I think there is a lot missing in the context of what is being shared. Posts about Michael Jordan (with whom I share a birthday) or a quote from Les Brown may shift your perception in that instance but isn’t the part that takes you forward.

The act of failing is just the signal, the magic is in the lessons learnt from it, it’s what you do next and how you do it! So next time you have a massive setback, and you will use one or all of the following points to assist you.

It’s in the moments after failing that matters!

It’s likely that initially you will have a knee jerk reaction to failure. Don’t beat yourself up, reacting in a highly sensitive and emotional way is a result of your passion and connection with the project.

Early days this is acceptable, however, it is something that needs to stop! If there is a lot on the table this could cost a lot of money, clients or even sink you.

Make Small Adjustments And Trial Them.

After moving through the initial need to react it’s time to change one or multiple things. It’s important not to make drastic changes, otherwise, you will be back to step one on a new path and that path will require change also.

Think of each action you make the editing process of a book. The book is first written with an excess of content and not in the order it will be when you read it. Then the content is organised, then filtered down to the highest quality and then proofread, then edited and then finally published.

All the way, the author is very aware that until it’s published, there will be adjustments and loads of changes from the first concept.

If you have this approach to each part of your business or project, you won’t always feel like you are starting again.

Assess after several failures in the same course of actions.

Now there is persistence and there is stupidity. One which may unfortunately not be determined until some time later.

The best way to know this is to test it. Having all of your approaches measured is what is required here, whether it be from measuring your body progress, analytics on your business or direct feedback from your significant other.

In using direct feedback keep the other parties in the loop, it may appear difficult prior to and during the process but in the end, it’s an easy conversation. Don’t overthink it, try something simple like, “hey, I’m working on xyz and I feel that it will make me better inxyz situation. Would you mind if I get your opinion on it as I’m working at it?”

Asking for advice can be hard if you’re in a head role and seen as the authoritative figure in your circles. If you have already made this leap, you will know that it doesn’t lower how you appear to others in any way. In fact, they will treasure the connection and you may even find a solution in collaboration.

And if you don’t want to do that you can access experts by the minute from a company like Clarify.

Don’t Throw Cash At Your Problems

I’m a massive believe in bootstrap businesses. Maybe it’s because I’ve never had a lot of capital when starting out but without any major funding behind you, it’s less likely that you will cause irretrievable damage. If you have an issue with client retention and your first reaction is to upgrade your facility with $100k you will only know how to solve issues this way.
When we first started Wellfit Personal Training I already had a small client base and we didn’t over commit with expenses. There were a few times that we were very close to not making rent but we didn’t rush out and borrow cash, we focused on the what we knew worked and stuck to it, now we are looking for our 4th location.
Don’t tell every person you know!

Having a setback can bring up the need to talk about it. Most of the time it’s just a way to build up what you do, making it appear hard so that you will have acceptance if you quit in the future. Talk to people that can help you with the solution not have an “oh poor me’’ mindset. Ultimately the actions in themselves aren’t hard, staying focused is.

I wish you all the best with your own path and hope you react to your failures well, learning grand lessons along the way. If you enjoyed this article, please share and inspire with the social buttons on the left-hand side of the page.

How to achieve and maintain a peak physique when you’re not a fitness model.

How do you operate under stress?

How to have a great workout every time!